CINCINNATI — Baker Mayfield is setting all kinds of standards for himself as he plows through his rookie season with the Cleveland Browns.

For the second game in a row, Mayfield was not sacked and did not throw an interception. In Sunday’s victory over Cincinnati, he threw four touchdown passes; in the Browns’ previous game before a bye, he had three in beating Atlanta. Two games, seven touchdowns, no sacks or interceptions, and, most important, two wins. 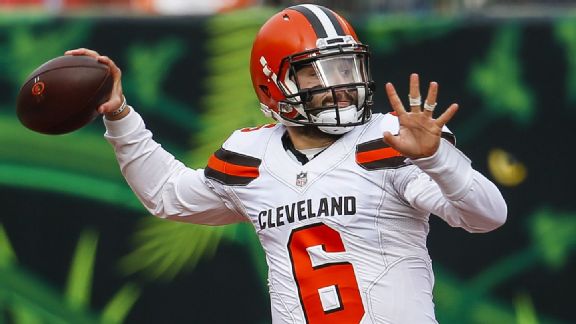 “That’s the goal,” Mayfield said. “And that needs to be the mentality.”

How to measure Mayfield’s progress? How about this: For the first time in recent memory, Mayfield has eliminated quarterback from consideration for the Browns in the first round of the draft.

“As the experience continues, the comfortability grows,” Mayfield said. “Really nothing else to that. As I see more looks and more things, I’m going to be more comfortable. I just got to go out there and do my job.”

Mayfield has accomplished that by playing progressively better, topped off by three games with Freddie Kitchens as offensive coordinator that have featured new formations, a different playcalling approach and simply better play.

Mayfield spread the ball around and followed a game against Atlanta in which he had a 151.3 passer rating with one in Cincinnati where he had a 143.9 mark. His numbers against Cincinnati could have been much better had the Browns not taken such a large early lead. In the first half, Mayfield completed 17 of 22 for 245 yards and three touchdowns.

He completed a touchdown to Antonio Callaway running left, and one to Darren Fells running right. He gave Nick Chubb a chance on a wheel route, and Chubb rewarded him by coming down with a circus catch.

“Everything seemed to be working,” Mayfield said. “But that’s the way we want it here in Cleveland.”

Mayfield has gone 124 minutes, 39 seconds without an interception; his last one came late in a loss to the Chiefs on Nov. 4. His 17 touchdowns are a Browns rookie record since the team joined the NFL in 1950, and are matched only by Otto Graham’s 17 when the Browns played in the old All-America Football Conference. Mayfield has five games in a row with at least two touchdown passes, which ties a rookie record. And he has eight games in a row with a touchdown pass, the Browns’ longest streak since Bernie Kosar in 1986 and ’87.

Since head coach Hue Jackson and offensive coordinator Todd Haley were replaced by Gregg Williams and Kitchens, respectively, Mayfield has completed 74 percent of his attempts, with nine touchdowns and one interception. His rating these three games: 129.5.

Kitchens has gone to shorter drops and quicker throws. Duke Johnson Jr. said on one touchdown drive Kitchens used five receivers on every snap. He has added a full-house backfield and has allowed Mayfield to use the entire field.

Mayfield said his fast start Sunday was “a lot” because of Kitchens.

“We have people we believe in calling the plays now,” Mayfield said.

He clarified that he believed in Haley as well, but said that Kitchens’ spin “has us believing in it.”

Quarterback play has been such a problem for the Browns (4-6-1) for so long that it’s hard to appreciate how much it matters. Mayfield is rewarding the faith the Browns and general manager John Dorsey showed when they made him the first overall pick in the draft.

“He’s been a blessing, and I can’t wait to see him develop,” safety Jabrill Peppers said. “We’ll see how this shakes out down the line.”

The caveat (there’s always a caveat): In their three most recent games, the Browns played three of the pass defenses ranked in the bottom quarter of the NFL. But Mayfield has done what he should do against those defenses: He has taken advantage.

The next game brings a different level of challenge at Houston, where the Texans have a top-10 defense. For Mayfield, every positive step is a good step, every experience a good one. The guy who threw four touchdowns and five interceptions in his first three starts has 13 TDs and two interceptions since.

His Total QBR against the Bengals was 96.2, best in the NFL in Week 12; two weeks earlier against Atlanta he rated 97.1, also the best in the league. His season passer rating, which hovered in the 70s in October, is 93.2.

With the Browns and their quarterback history, it’s never good to state anything with finality. But with Mayfield playing the way he is, it’s not a stretch to say that no matter the final record, 2018 will be a successful season in Cleveland – because at long last and after years of searching, the Browns have found their quarterback.