The NHL filled out the All-Star rosters on Wednesday night, and since every team needs at least one representative (yes, even teams that have had few highlights this season, such as the Blues, Kings and Senators) some players have been snubbed.

Below is our handy guide, sorted into three groups of snubs, to help you process your outrage.

Four of the NHL’s current top 15 scorers missed the cut. That includes Mitch Marner (sixth), Brayden Point (seventh), Leon Draisaitl (tied for 11th) and Sean Monahan (tied for 14th). What do all of these guys have in common? They’re all young (under the age of 24) and have teammates with stronger name recognition who slid in ahead of them.

For Marner — who is first in the league in primary assists — that’s John Tavares. For Point, it’s Steven Stamkos, even though Point has had a more statistically productive first half. Stamkos is in on prior reputation; sure, he has 22 goals, but he isn’t having his best season, and Point is one of the NHL’s breakout stars of 2018-19.

Draisaitl will always be overshadowed by Connor McDavid, and it’s easy to argue the streaky (and currently trending downward) Oilers are not deserving of more than one rep.

And for Monahan, the snub is really a slight to the Flames. Since the host Sharks got three players in, Calgary was limited to just one, despite having one of the most dynamic offenses in the league with a few dazzling players, including Monahan and Matthew Tkachuk, who are deserving.

I propose this: let’s add a fifth division to this year’s tournament. It’s the leftover guys from the Atlantic Division who were squeezed out by a numbers game. 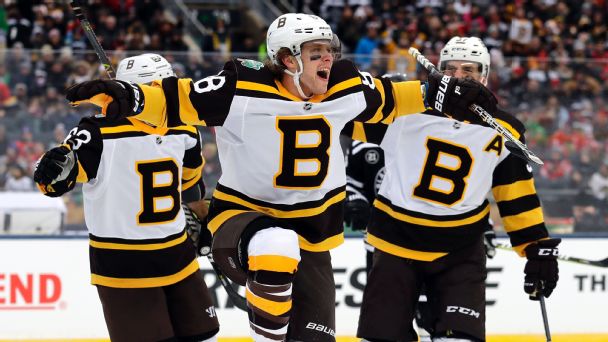 Happy New Year! Off the top of the show, Emily Kaplan and Greg Wyshynski address the breaking news regarding Alex Ovechkin, who announced that he will not play in the 2019 All-Star Game (3:05). Sean Shapiro, of “The Athletic,” weighs in on the drama in Dallas, where Stars CEO Jim Lites criticized standout players Jamie Benn and Tyler Seguin (14:22). Plus, Wyshynski was at the 2019 Winter Classic, and recapped the New Year’s Day festivities with Marisa Ingemi of the Boston Herald (35:38). Listen >>

Here’s the roster. Goalies Frederik Andersen and Andrei Vasilevskiy; both of these netminders probably deserve to be in over Carey Price anyway. The forwards are Max Domi, Dylan Larkin, Brad Marchand, Marner, Point and Jeff Skinner. And the defensemen would be Morgan Rielly, plus Shea Weber or Jeff Petry (take your pick).

Not only could this group easily compete, I’d bet on them to win the thing. Heck, I think any division would love having Marner, Point and Skinner; Skinner, by the way, trails only Alex Ovechkin for the league lead in goals, and is probably the biggest overall snub besides Point.

No division has had a bigger rise in the past few months than the Atlantic, which boasts the two best teams in the league — highlighted by the Lightning and their absurd plus-51 goal differential — and two of the most pleasant surprises in the Sabres and Canadiens.

Defensemen rarely get the love they deserve, but a shoutout is necessary for Reilly and Flames captain Mark Giordano, who have both emerged as Norris Trophy contenders but are sidelined to make room for their forward teammates.

Goalie Robin Lehner is having an incredible rebound campaign for the Islanders (among goalies who have played at least 1,000 minutes, he leads the league in save percentage, at .930, and goals-against average, at 2.14) and has a terrific story of redemption after confronting battles with mental health and substance abuse over the summer. But the Islanders, currently fourth place in the Metropolitan Division, don’t really need more than one player there, and Mathew Barzal is a fine choice.

The Blue Jackets are sending Seth Jones and Cam Atkinson, but Sergei Bobrovsky would be also a great pick (and has played better than Braden Holtby, especially of late). However it should be noted Bobrovsky told reporters he would have likely skipped the game anyway, opting for rest like his countryman Ovechkin.