LOS ANGELES — Music blared, and players angled their phones to record the scene on social media as laughter and cheers filled the Los Angeles Rams‘ locker room at the L.A. Memorial Coliseum.

It was a rare glimpse at a postgame celebration, a display typically unseen by organization outsiders. But after the Rams defeated the Kansas City Chiefs 54-51 in one of the most anticipated Monday Night Football matchups in NFL history, the Rams felt too exuberant to calm down, even as reporters filed in.

“It was a whirlwind,” Rams coach Sean McVay said after the highest-scoring game in Monday Night Football history.

For an organization that endured a grueling series of circumstances over the past two weeks, McVay’s words might have been an understatement.

In a span of 12 days, the Rams grieved with the Thousand Oaks community after a shooting at Borderline Bar and Grill claimed 12 lives. Then at least 100 employees in the organization were among more than 250,000 people across Ventura and Los Angeles counties who were ordered to evacuate their homes because of wildfires that scorched 96,949 acres.

Even after the team arrived in Colorado Springs, Colorado, the previous Monday, where they had long planned to train at altitude in preparation for their showdown against the Chiefs in Mexico, the series of unexpected events continued. The field at Estadio Azteca in Mexico City was not suitable for play, the NFL determined, and the game was moved to L.A.

The Rams remained in Colorado Springs for the week, a place to take refuge from the fires back home, to bond as a team and to prepare for a matchup of two 9-1 teams.

“The players did an outstanding job of handling what seems like two weeks that was about two years’ worth of things that they had to go through,” McVay said Tuesday, 17 hours after the game ended and minutes before he said he would attempt to finally get some sleep. “All they did was just handle it like pros.”

“Sean talks all the time about two things: being connected and being at your best when your best is required,” Rams COO Kevin Demoff said after the game. “I think for the entire organization, for the last two weeks, that explains everything.”

On Nov. 8, 12 victims lost their lives at Borderline, just about four miles from the team’s practice facility and seven miles from their business headquarters. McVay held a team meeting to discuss the tragedy, and veteran left tackle Andrew Whitworth took the floor to implore teammates to embrace the community in a time of need.

But by the afternoon, focus began to shift. The community was attempting to make sense of an otherwise inexplicable tragedy when smoke began to fill the air miles from where the team practiced, as strong winds fueled fires that had sparked in the area.

Hours later, evacuations began. Right tackle Rob Havenstein, his wife, Meaghan, and their 7-week-old daughter returned to the practice facility after they were evacuated from their home. They soon found a hotel, only to discover they’d have to evacuate it, too.

The Havensteins’ experience was not unique. By the early morning hours on Nov. 9, the coach’s phone began to buzz, as a group-text message chain alerted McVay that many members of his staff had been forced to leave their homes.

“The fire stuff is scary,” Marcus Peters said. “Personally, I seen it from my backyard in Thousand Oaks, so my family got out. ? Things like that is just sad to see.”

McVay canceled the team’s Friday practice ahead of its NFC West showdown with the Seattle Seahawks. At that point, 45 people in the organization, including 20 players and coaches, had been evacuated from their homes.

On Nov. 10, the day before the Rams were to play the Seahawks, a team meeting was held at their downtown L.A. hotel, where several players and their families had stayed an extra night. Later that morning, a final practice was held on USC’s campus.

By the time Sunday’s game arrived, it seemed plausible if not acceptable that if the Rams were to lose a second game this season, the circumstances would justify it. Even as warm-ups took place, many in the organization — now up to 100 evacuated — received status updates on their homes via texts or emails, whether their houses survived the fires or were among the 1,452 structures that burned.

The Rams defeated the Seahawks after they made a defensive stand on the final drive.

The game served merely as momentary distraction from the real-life issues that engulfed the L.A. area. Few are likely to remember that Sunday matchup. Many will likely never forget that Whitworth donated his game check, nearly $60,000, to the families of the Borderline victims.

“There’s more for us to do as people,” Whitworth said. “We have to pull together.”

The following day, the Rams boarded a plane to Colorado Springs, where they’d stay at the Broadmoor Resort to train at altitude for the fast-paced Chiefs. But as they departed L.A., reports began to surface that the field at Estadio Azteca was unsuitable for play. And sure enough, a day later the NFL announced that the game would not be played in Mexico City. It instead would move to the L.A. Memorial Coliseum.

“I was kind of skeptical of playing in the stadium just after seeing a lot of the pictures that came out and just seeing how bad the field was,” defensive tackle Michael Brockers said. “I think a lot of the elder players, the players that were important to this team, stepped up and said that they didn’t want to play or weren’t going to play. So appreciate that.”

McVay determined, despite the game returning to sea level, that the Rams would remain in Colorado Springs for the week. After all, owner Stan Kroenke had chartered a second plane to deliver family members, and the resort became a refuge from the uncertain situation back home.

“It’s been a little bit wild for sure,” Jared Goff said from the Broadmoor Resort. “But with that being said, there’s a lot more people dealing with a lot worse than what we’re dealing with right now. We’re the lucky ones.”

To honor those lost at Borderline Grill and Bar, the wife and son of fallen Sgt. Ron Helus, Karen and Jordan, light the ceremonial torch.

While in Colorado Springs, the Rams attended a Denver Nuggets game, enjoyed their weekly day off and turned to preparing for the Chiefs. A hotel ball room was converted into a make-shift football field, with tape on the floor to outline a football field for walk-throughs, and the players rode buses to and from Air Force Academy for two practices.

“It’s been nuts,” said left guard Rodger Saffold, who added that he had never experienced anything quite like the past two weeks in his nine-year career. “It’s really been a roller coaster.”

Keeping in theme, the Rams’ flight home Saturday night was delayed as an ice storm rolled across southern Colorado. Their flight left late, and players and staff members arrived home in the early-morning hours on Sunday. 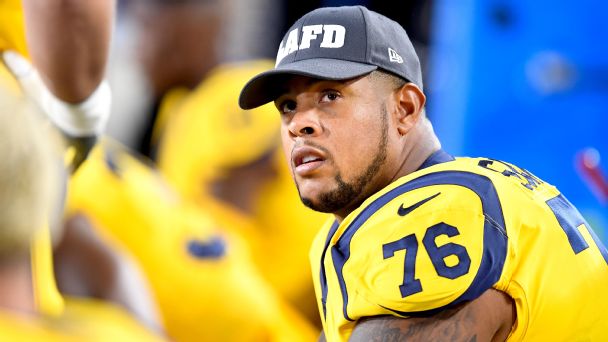 By Monday, normalcy set in as prime time approached. For all the inconveniences of the previous two weeks, the Rams proved to be fortunate. All found themselves in good health. Their homes remained standing, and they were able to provide strength — and an escape — that many in the greater L.A. area sought.

Before kickoff against the Chiefs, the team honored the families of the Borderline victims and offered their gratitude to first responders who saved so many homes.

“You sometimes realize that things are bigger than yourself,” Whitworth said after the game. “This has been one of those moments.”

It was a trying two weeks. It could have broken a city or provided an endless list of excuses for a team. Instead, the Rams stayed together, entrenched themselves in the community and proved that nothing can knock them off track as they continue their approach to a date in February.

“We all understand each other,” Todd Gurley said. “We all are working toward one goal.”