BRISBANE, Australia — A fight against Anthony Mundine would have been the furthest thing from Jeff Horn’s mind after he sensationally upset Manny Pacquiao to become the WBO world welterweight champion in July, 2017.

Horn (18-1-1) put his name up in lights and suggested he could be one of the greatest fighters ever to emerge from Australia when he scored a unanimous points decision over the former eight-division world champion and future Hall of Famer at a packed out Suncorp Stadium in Brisbane.

While it may have been a scorecard that many didn’t agree with, and still don’t, nevertheless it showcased Horn’s potential and subsequently opened up dozens of doors for him in the world of boxing.

But the speed of Horn’s meteoric rise to prominence was matched only by his plummet off the Australian sporting radar.

Five months after his triumph over Pacquiao, the Queenslander successfully defended his title against British traveler Gary Corcoran and the next logical step was a date with Terence Crawford — the world’s best pound-for-pound boxer — in Las Vegas.

From the opening bell at the MGM Grand it became clear that Horn was way out of his depth. For eight rounds he was outclassed, outpaced and totally out-boxed, giving referee Robert Byrd no choice but to call a halt to proceedings late in the ninth round. CompuBox statistics highlighted Crawford’s dominance with the American landing 155 punches to Horn’s lowly 58.

It was a humiliation, a boxing lesson, and one that justified many peoples’ beliefs that Horn really shouldn’t have won the fight against Pacquiao.

“Tasting that first loss really, really hurt,” Horn told ESPN in the lead-up to the Mundine fight. “I did leave something [in the ring] after it. I still wouldn’t say that I’m firing on full cylinders of confidence.”

Another five months on and Horn is set for a return to the ring, this time against Australian veteran Mundine (48-8-0). Despite coming off the brutal loss, Horn will start as an overwhelming favourite, but it’s a fight which is shaping up as a rather treacherous one for the former school teacher.

There was a reason Horn’s promoter Dean Lonergan claimed a bout between his man and Mundine appealed to him as much as “drinking 10 cups of warm sick”. Why? Because it’s really a lose-lose situation.

Mundine is wily veteran with decades of experience but the reality is he’s lost three of his past five fights and at 43 years of age is miles past his prime as a professional boxer. The former NRL star has already said this will be the final time he steps into the ring and that has taken the pressure right off. He has nothing to lose and only a fitting send-off to gain.

“I don’t know if he’s going to be able to rebound from this,” Mundine said on the possibility of Horn losing the fight. “I’m like a caged tiger. I’m ready to kill and shock the whole wide world.”

Should Horn win Friday night’s encounter, either by knockout or a decision, it’s not going to see Crawford’s camp picking up the phone for a re-match. It won’t land him a big money fight in Las Vegas. It won’t even shake his one-fight-wonder status which has been following him ever since his win over Pacquiao.

But if he was to lose, well, it would be curtains and his dream of regaining a world championship title would almost certainly be crushed. No matter how well Mundine fights, for Horn, there would be no coming back from it. In fact, the negative impact of a loss to Mundine would outweigh the positives from his defeat of Pacquiao. 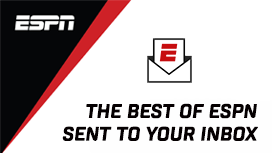 Latest news & video – delivered to you

So why is Horn taking on this fight?

“I guess that pressure of losing [to Mundine] was countered by the financial reward for this fight,” Horn said. “That was what made [the fight] viable to take on.”

From a payday point of view you can understand the reasoning behind Horn agreeing to this fight. After his loss to Crawford there wasn’t exactly a long line of A-grade fighters queuing up for a bout, so the AU$2-3 million that he is estimated to earn on Friday night would have been hard to knock back.

Nevertheless, it’s still a monumental risk that has effectively seen his career thrown on the line for a quick cash influx.

“I actually don’t like being the favourite and having the expectation that I should knock him out. But there is that pressure now that I have to win and I have to win convincingly,” Horn said. “I need to have an impressive victory to get the attention of the world.”

Horn’s not the only one who sees it that way. Long-time trainer Glenn Rushton also feels Horn must make a statement, but it will only count for something if Mundine brings his A-game.

“I want Mundine to come out looking slick and as sharp as ever and then Jeff combats that by showing he can handle that speed,” Rushton said. “If the fight unfolds the way I want it to unfold and Jeff slowly breaks him down and puts him on the canvas maybe a couple of times and eventually stops him, I think it will do wonders for Jeff’s profile.”

The only thing which is certain for Horn is that he cannot lose. If he does, it could be curtains for his career.